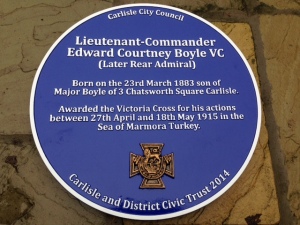 It is now one hundred years since the outbreak of the First World War, and the Trust, in conjunction with Carlisle City Council, has ordered two blue plaques which will fixed to the homes of the city’s two recipients of the Victoria Cross.

Born in Jarrow in 1893 he came to live at 8 Petteril Terrace, Harraby Carlisle.

Awarded the Victoria Cross (Posthumous) on the 28th June 1918 for heroic gallantry in the battle of Givenchy.

He disabled an enemy machine gun nest then kept on shooting to enable his men to escape to safety. He sustained head wounds and died shortly after. His name is honoured on the Harraby War Memorial.

Born on the 23rd March 1883, son of Major Boyle of 3 Chatsworth Square Carlisle.

He was awarded the Victoria Cross for his actions between 27th April and 18th May 1915 in the Sea of Marmar Turkey. His submarine E14 dived under Turkish Minefields and sank a military transport and two enemy gun boats. His actions paralysed all enemy coastal traffic in the area and were a great boost to allied moral.

We are currently planning a ceremony to unveil the plaques.

We would love to invite any descendants of Joseph Collin and Edward Boyle along to the unveiling. If you have any information to help us to contact them, please do get in touch.

You can be part of Carlisle and District Civic Trust and have your say in helping to improve and maintain our environment.

Find out more about becoming a member