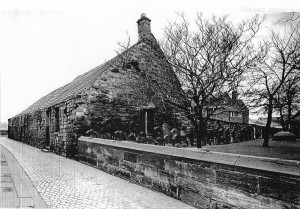 In 1972 Carlisle and District Civic Trust received a national Civic Trust Award for the restoration and adaptation of a Grade 1 listed building – Carlisle Tithe Barn. The Tithe Barn of the Augustinian Priory of St Mary’s, Carlisle, was built towards the end of the fifteenth century by Thomas Gondibour who was Prior from 1465 to 1507. It’s position within the town’s walls was exceptional, and says something about the unsettled state of the borders! The surviving Sallyport next to the Tithe barn was a gate into the medieval town and was on the site of the Roman west gate. The barn was derelict and Carlisle had been in real danger of losing this unique and important historic building until the then newly formed Civic Trust took up the fight to save and use it.

One of the Trust’s first acts was to approach the Church Commissioners and Historic Building Council for grant aid towards the cost of restoration. This was promised provided the use and maintenance of the building could be assured. St Cuthbert’s Church undertook to restore the barn as a public and church hall in 1968. A restoration and appeal committee was formed and they set out to raise the £30,000 needed.

The Tithe Barn was in a precarious state and restoration was to prove difficult. It had been standing empty for several years. Restoration was carried out sympathetically, and a decision was made to form a glass screen in front of the oak supporting posts, so leaving the whole of the medieval timber work free and uncluttered. The roof required a lot of work with each massive oak truss being individually jacked up for repair. All the oak pegs were replaced with new. A missing gable and side wall had to be rebuilt. Repair work began in April of 1969. The newly restored building was opened on 6th May 1971 by the Mayor of Carlisle. Lack of funds meant that the west end was not completed in stone until nearly thirty years later. It was formally dedicated on 10th May 1998. Today it is well used by St Cuthbert’s Church and the public and Carlisle citizens continue to enjoy this amazing building.

You can be part of Carlisle and District Civic Trust and have your say in helping to improve and maintain our environment.

Find out more about becoming a member